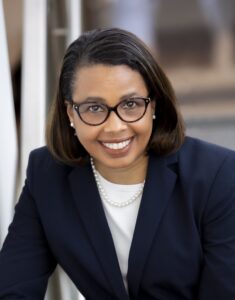 Public Policy Ph.D. alumna Sylvia Trent-Adams (’06), was confirmed as the seventh president of The University of North Texas Health Science Center at Fort Worth (HSC). Before being confirmed as president, she served as HSC’s executive vice president and chief strategy officer. Dr. Trent-Adams received UMBC’s Alumna of the Year award in 2017 and served as the U.S. Deputy Surgeon General from October 2015 to January 2019. From April to August 2017, she served as Acting Surgeon General for the U.S.

Dr. Trent-Adams began her career in public health in 1992 working with the U.S. Public Health Service Commissioned Core after serving as an Army officer and nurse. She retired from the Core in 2020 as Rear Admiral Upper Half. Her defining accomplishments include managing the $2.3 billion Ryan White HIV/AIDS Treatment Extension Act of 2009, and constant advocacy for the role of nurses in medicine and health policy. Throughout her career, she has prioritized expanding access to health care for poor and underserved communities.